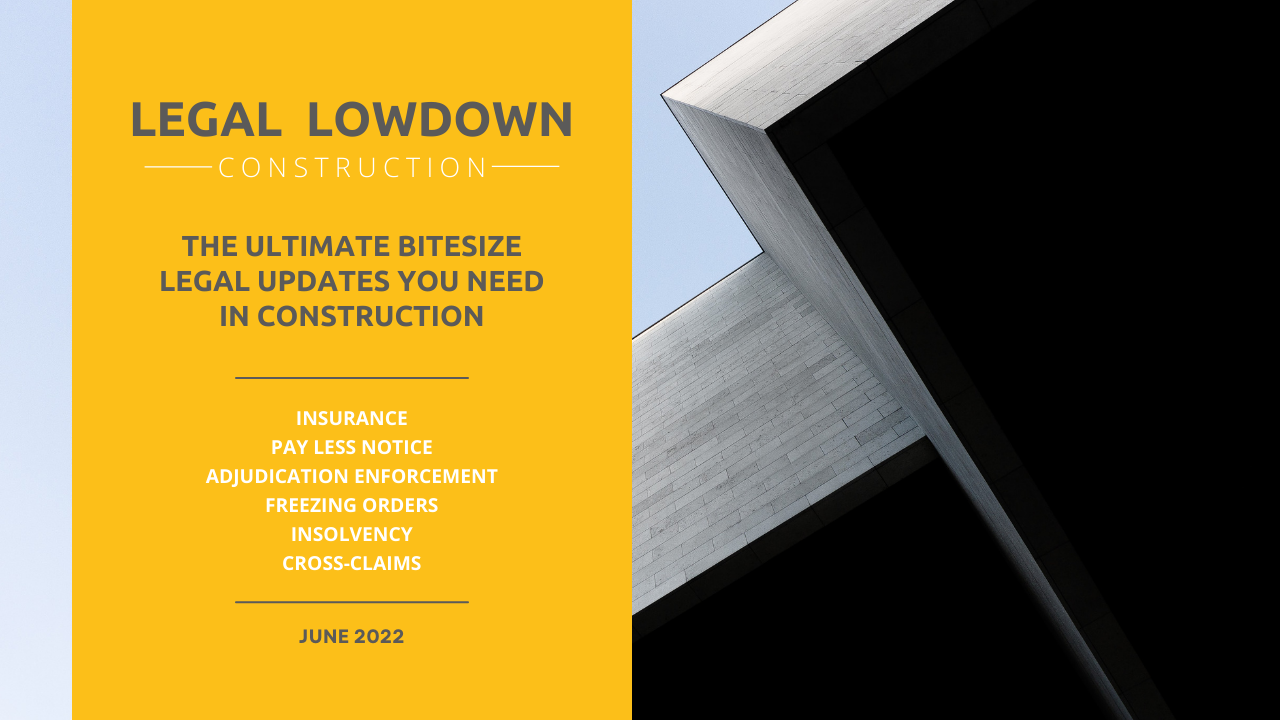 Where two parties are insured against the same risk, one cannot successfully sue the other for losses if the risk materialises (unless the contract says otherwise).  So where a contractor is joint named with an employer under one policy, the insurer cannot recover damages from the contractor (by way of subrogation).  Here, however, the all risks policy naming both parties did not cover the contractor for its own defective works and the insurers could recover the losses.

A pay less notice must be referable to the specific application for payment for which it is intended.  Here, a payless notice referable to an application 25 was not effective against application 24 (although it could have been drafted to refer to both).  It is notable that this case appears to allow contractors, in some circumstances, to delve for technical defaults in notices relating to payment cycles which are no longer current.

A company enforcing an adjudicator’s decision in the High Court for £2.9m obtained a freezing order for that sum pending the final hearing.  The Court held that such an order may be available when there is a risk that the defendant to the enforcement of an adjudicator’s decision may dispose of sufficient assets to frustrate that enforcement.  This is the case even where the disposal of assets would not be made with the actual intention of ensuring that the judgment could not be met.  Here, the defendant had already transferred almost £6m to certain third party companies which it had set up since the dispute arose.

FTH Ltd, the claimant in adjudication enforcement proceedings, was subject to a Company Voluntary Arrangement (owing to financial difficulties).  Varis, which had a significant cross-claim, successfully defended FTH’s claim for summary judgment.  The Court may refuse summary judgment where there is a real risk that a claimant enforcing an adjudicator’s decision may go into liquidation, denying the defendant the possibility of succeeding on a cross claim.

The experts in a dispute relating to noise, odours, and emissions were given the task of preparing a joint experts’ statement.  In the course of doing so, the Claimants’ expert liaised closely with his instructing solicitors regarding his contribution to the statement’s production.  On the Kronospan’s application, the Court revoked permission to allow his evidence (and the Claimants had to instruct an alternative expert).  The Court held that whilst an expert may interrelate with instructing solicitors and client at the preparatory stage, he or she must act independently when formulating a joint statement and must not become, in effect, an advocate for the client’s case.

Service of termination of notices.

A contractual notice to terminate was issued by the Claimants instead of by the Contract Administrator as the contract required.  The Court held that it was, therefore, ineffective.  Termination clauses are construed strictly and must be followed to the letter.

The parties to an adjudication disputed as to which of two contracts applied to a refurbishment project.  The adjudicator decided the issue but his supporting analysis had not been argued by either party.  His decision was upheld.  Provided an adjudicator addresses the correct issue and allows each party a fair chance to make representations, failing to follow the exact arguments of the successful party is insufficient to invalidate the decision.

An adjudicator (in an adjudication for £35,974.29) decided that he did not have jurisdiction to decide the dispute as he considered that the referring party had proceeded against the wrong party – against a company instead of its owner personally.  He therefore resigned.  Neither party had raised this jurisdictional issue.  The adjudicator issued a fee note for £4,290. The Court of Appeal upheld the first instance decision.  It held that, on the adjudicator’s terms of engagement (which were in a common form), he was entitled to charge even though he had decided an issue he had no been asked to decide by either party.  The position would have been different only if he had not decided in good faith.

Horseplay on site by one site operative caused hearing injuries to the operative of another company.  The company employing the first operative was held not vicariously liable to the second operative and had not breached its duty of care to him.  The first operative did not carry out the act in the course of his employment, and the risk of this damage caused in this way was not foreseeable.  It would be unreasonable and unrealistic to expect an employer to have in place a system to ensure that its employees did not engage in horseplay.

The design and manufacture of doors for a fit-out did not constitute  construction operations for the purposes of the Housing Grants Construction and Regeneration act 1996 and the automatic entitlement to adjudicate provided by the Act did not apply.

An architect visited premises in a professional capacity.  He unlocked the door and disabled the alarm.  On leaving, he re-locked the door and re-set the alarm.  A fire was started in the premises believed to be by an intruder who entered during the architect’s visit.  The Court of Appeal held that the architect’s firm could, in principle, be liable in negligence for not securing the property during his visit, even though the damage was caused by a third party.  The Technology and Construction Court will now decide the case fully.